A loader is a type of tractor, usually wheeled, sometimes on tracks, that has a front-mounted square wide bucket connected to the end of two booms (arms) to scoop up loose material from the ground, such as dirt, sand or gravel, and move it from one place to another without pushing the material across the ground. A loader is commonly used to move a stockpiled material from ground level and deposit it into an awaiting dump truck or into an open trench excavation.

The loader assembly may be a removable attachment or permanently mounted. Often the bucket can be replaced with other devices or tools—for example, many can mount forks to lift heavy pallets or shipping containers, and a hydraulically opening “clamshell” bucket allows a loader to act as a light dozer or scraper. The bucket can also be augmented with devices like a bale grappler for handling large bales of hay or straw. 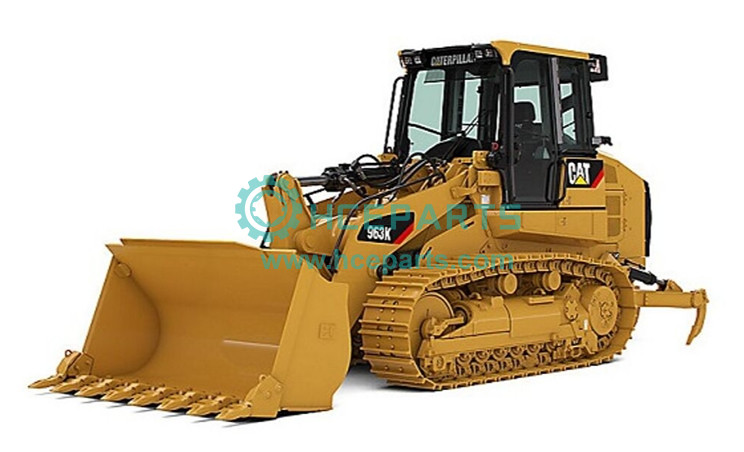 Large loaders, such as the Kawasaki 95ZV-2, John Deere 844K, ACR 700K Compact Wheel Loader, Caterpillar 950H, Volvo L120E, Case 921E, or Hitachi ZW310 usually have only a front bucket and are called front loaders, whereas small loader tractors are often also equipped with a small backhoe and are called backhoe loaders or loader backhoes or JCBs, after the company that first claimed to have invented them. Other companies like CASE in America and Whitlock in the UK had been manufacturing excavator loaders well before JCB.

The largest loader in the world is LeTourneau L-2350. Currently these large loaders are in production in the Longview, Texas facility. The L-2350 uses a diesel-electric propulsion system similar to that used in a locomotive. Each rubber tired wheel is driven by its own independent electric motor.

Loaders are used mainly for loading materials into trucks, laying pipe, clearing rubble, and digging. A loader is not the most efficient machine for digging as it cannot dig very deep below the level of its wheels, like a backhoe or an excavator can. The capacity of a loader bucket can be anywhere from 0.5 to 36 m3 depending upon the size of the machine and its application. The front loader’s bucket capacity is generally much bigger than a bucket capacity of a backhoe loader.

Unlike most bulldozers, most loaders are wheeled and not tracked, although track loaders are common. They are successful where sharp-edged materials in construction debris would damage rubber wheels, or where the ground is soft and muddy. Wheels provide better mobility and speed and do not damage paved roads as much as tracks, but provide less traction.

In construction areas loaders are also used to transport building materials – such as bricks, pipe, metal bars, and digging tools – over short distances.

Front-loaders are commonly used to remove snow especially from sidewalks, parking lots, and other areas too small for using snowplows and other heavy equipment. They are sometimes used as snowplows with a snowplow attachment but commonly have a bucket or snow basket, which can also be used to load snow into the rear compartment of a snowplow or dump truck.

High-tip buckets are suitable for light materials such as chip, peat and light gravel and when the bucket is emptied from a height.

Unlike backhoes or standard tractors fitted with a front bucket, many large loaders do not use automotive steering mechanisms. Instead, they steer by a hydraulically actuated pivot point set exactly between the front and rear axles. This is referred to as “articulated steering” and allows the front axle to be solid, allowing it to carry greater weight. Articulated steering provides better maneuverability for a given wheelbase. Since the front wheels and attachment rotate on the same axis, the operator is able to “steer” his load in an arc after positioning the machine, which can be useful. The tradeoff is that when the machine is “twisted” to one side and a heavy load is lifted high, it has a greater risk of turning over to the “wide” side.

The term “loader” is also used in the debris removal field to describe the boom on a grapple truck.

The major components included in a loader are the engine (diesel in almost all cases), the hydraulic components (such as pumps, motors and valves) and the transmission components (gearbox, axles, wheels/tracks, pumps, motors, etc.). The engine runs both the hydraulics and the transmission, and these in turn move the front attachment (a bucket, forks, sweeper, etc.) to manipulate the material which we are handling (sand, gravel, cereal, manure or anything else) and the wheels or tracks to move the machine around the jobsite.
Wheel loaders
The first wheel loader was invented by Volvo Construction Equipment in 1954, it was called H10.[2] Back then it was based on a tractor and had a rear wheel drive. Today wheel loaders are articulated and the rear and front wheels are the same dimensions.

The Israeli Combat Engineering Corps uses armored Caterpillar 966 wheel loaders for construction and combat engineering missions in militarily occupied territories such as the West Bank. They are often seen building or removing road blocks and building bases and fortifications. Since 2005, they have also been used to demolish small houses. The Israel Defense Forces added armor plating to the loader to protect it against rocks, stones, molotov cocktails, and light gunfire.

Rio de Janeiro’s police elite squad Batalhão de Operações Policiais Especiais (BOPE) has acquired one wheel loader designed for military use to open routes and make way for the police in Rio de Janeiro’s slums, which are controlled, and blocked, by drugdealers.

Several if not most countries have similar equipment. The Dutch armed forces for instance use models like the Werklust WG18Edef, which weighs 15 tons, 2 more than the corresponding unarmored civilian model. In addition, the Dutch military previously used extra armor modules covering most of the window surface with steel for extra protection. These were however not popular with the crews due to low visibility.

These loaders are a popular addition to tractors from 50 to 200 hp. Its current ‘drive-in’ form was originally designed and developed in 1958 by a Swedish company named Ålö when they launched their Quicke loader.[5] Tractor loaders were developed to perform a multitude of farming tasks, and are popular due to their relatively low cost (compared to Telehandler) and high versatility. Tractor loaders can be fitted with many attachments such as hydraulic grabs and spikes to assist with bale and silage handling, forks for pallet work, and buckets for more general farm activities.
Compact front end loaders

Abram Dietrich Thiessen of Eyebrow Saskatchewan in the 1940s built the first quick attach front end loader. International Harvester’s took a picture of the loader and replicated it at the Regina Agribition in November of the same year.
Semi-curved compact loader on a John Deere compact utility tractor
Visibility comparison of different loader designs

While the front-end loaders on CUT size tractors are capable of many tasks, given their relatively small size and low capacities when compared to commercial loaders, the compact loaders can be made more useful with some simple options. A toothbar is commonly added to the front edge of a loader bucket to aid with digging. Some loaders are equipped with a quick coupler, otherwise known as a quick attach (QA) system. The QA system allows the bucket to be removed easily and other tools to be added in its place. Common additions include a set of pallet forks for lifting pallets of goods or a bale spear for lifting hay bales. The tines of a bale spear are three feet long, and sufficiently sturdy to penetrate a county sheriff’s side door.[6]

LHD (Load, Haul, Dump machine) is also a front end loader but meant to be used for mine compact conditions, can handle various range of loads with varying size of buckets, and can be driven with electric motors as well as diesel engines.
Skid loaders and track loaders
Main articles: skid loader and track loader

A skid loader is a small loader utilizing four wheels with hydraulic drive that directs power to either, or both, sides of the vehicle. Very similar in appearance and design is the track loader, which utilizes a continuous track on either side of the vehicle instead of the wheels. Since the expiration of Bobcat’s patent on its quick-connect system, newer tractor models are standardizing that popular format for front end attachments.

Swingloaders
A swingloader is a rigid frame loader with a swinging boom. The boom can swing 180 degrees or more. Swingloaders are primarily used by the railroad industry to lay rail. Like other loaders many attachments can be attached to the boom such as magnets, forks, and buckets. Smaller swingloaders are used in farming applications for loading out. A swinging boom is advantageous where space is limited. The loader is able to lift on all sides and dump off on all sides.